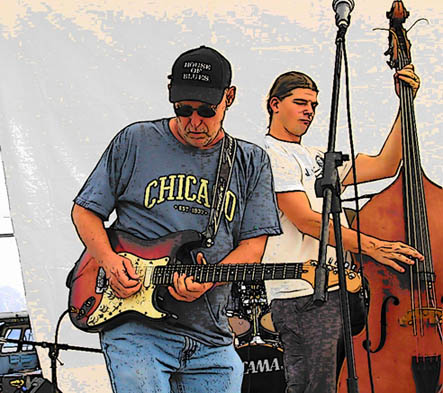 Bill Ande started playing guitar in his early High School years. The first band he was in was called the R-Dells, made up of high school buddies who used to sit around at the drive-in restaurants and harmonize. Not having a band to back them, they bought instruments and learned how to play all the hit songs. The R-Dells became one of the busiest and most popular bands in South Florida, playing all the dance halls and whatever clubs would hire underage bands. Being young and inspired, they became a regular at Criteria Studios in Miami recording everything from demos to masters with songwriters and touring artists. They went on to tour the south as a rhythm section, backing all the hit artists who came to Florida, which even increased their popularity.

Some of those artists were Jerry Lee Lewis, Chuck Berry, Sam and Dave, Jay and the Americans, The Chiffons, The Angels, Leslie Gore, Jimmy Clanton, DeeDee Sharp, Steve Alaimo, Chubby Checker, The Drifters, The Coasters, and many, many more.

The R-Dells recorded several singles that helped promote the band, but none became national hits. While performing a nightclub act in Miami, just for kicks, they combed their hair down and called themselves The American Beetles. An agent from South America saw them and booked them, through Universal Attractions NYC,  all over South America. The American Beetles performed concerts and live T.V. shows in Argentina, Venezuela, Uruguay, Brazil, and Peru. This led to performances in Puerto Rico, Bermuda, Portugal, Canada, and Spain, where they performed in the bullrings. They sang American Rock, and Rhythm and Blues songs, with their own flare and high energy.

The American Beetles recorded several original records that never got recognition from the American DJ’s, save a few who could get past the English invasion and dared play them. They were managed by Bob Yorey, who later managed Joe Frazier and the Knockouts, and numerous other acts.

They eventually changed their name to The Razors Edge and had success with several records that earned them spots on American Bandstand, Where The Action Is, Upbeat, and other popular shows. The most popular record was called “Let’s Call It A Day Girl”, a Four Seasons style song with lots of harmony. Most of their bookings were in show clubs from New York to Los Angeles, to Las Vegas, even Canada. In Miami they were the house band at The World, a huge concert / dance hall. They also played at The Place, and Thee Image in Miami Beach with their friends the Blues Image, featuring Mike Pinera who later played with Iron Butterfly.The Razor’s Edge opened a concert at Miami’s Gulfstream Racetrack featuring JimiHendrix, Frank Zappa, Blue Cheer, and others. That was the final concert for the band in the Miami area.

After The Razor’s Edge breakup, Bill moved on to San Francisco California where he lived in the Haight-Ashbury and helped form a band known as Osceola. The name came when all the members realized they were from Florida, even though they met in California, hence the name Osceola, who was a Seminole Chief that never surrendered or signed a peace treaty with the government. During that period,Osceola became very popular and used to have people like Carlos Santana, Elvin Bishop, David La Flamme ( It’s a Beautiful Day), Richie Havens, and many more players stop by and jam with them in their rehearsal basement.

While touring the South, and on the brink of signing a contract with Columbia Records, several of the band members got very ill on the road, and could not continue. The band broke up.

Bill returned to Northern California where he eventually became part of a band called Seymour Light, a band dedicated to spiritual enlightenment. They did some touring and ended up in Atlanta where they played the clubs in Underground Atlanta and the surrounding suburbs. This was during the disco era. From there Bill went to Tallahassee to join up with his former drummers in The Tallahassee Band, a southern rock style band. This was a smoking band that had many players in and out of it.

At the demise of The Tallahassee Band, Bill concentrated on producing and engineering. He managed, built, and co-owned, several studios where he worked with some of the best players in the world. Some of the people he worked with were Alex Acuna, Richie Zellon, Oscar Stagnaro, Richard Drexler, Ignacio Berroa, Dave Samuels, Richie Havens, The Atlanta Rhythm Section, Molly Hatchet, Lynyrd Skynyrd, Rick Derringer, and many others.

When the playing bug bit again, Bill started playing blues in Orlando with some friends. First he played with The Blues Brigade and then the band Kablooz. There are not many blues venues in Orlando, so Bill moved to Chicago, where blues is King. That is where his present band, The Bill Ande Band, plays now.